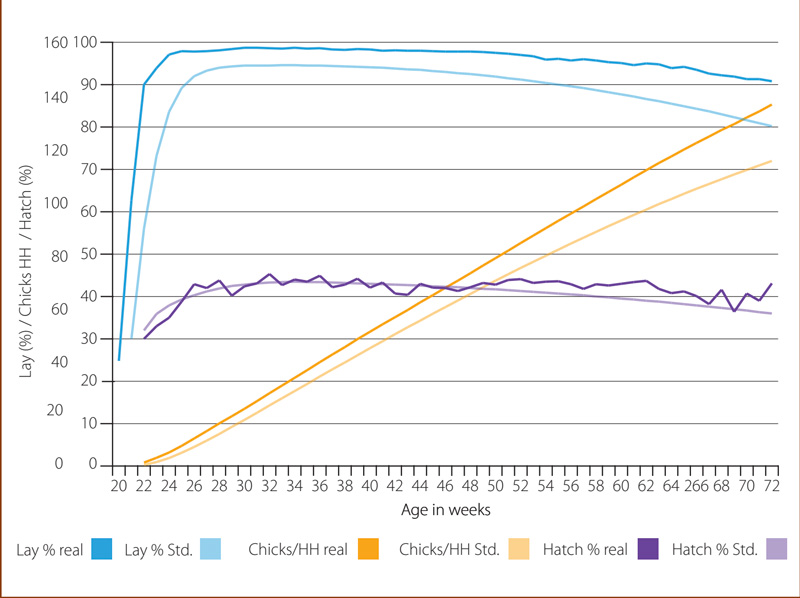 After reaching a good production peak, H&N breeders should enter a production plateau. Their genetic potential allows them to maintain a high production level, optimal egg size and good eggshell quality for some weeks but to achieve this, pay close attention to certain aspects:

Detailed laying cycle records are necessary to evaluate performance and profitability. Daily figures for hen-day production (total eggs and settable eggs), egg weight, feed and water consumption and mortality are necessary. This information will allow you to calculate very important data including daily egg mass, cumulative egg mass and feed conversion. All results should be presented in graphs.

Use of graphs will improve analyses of flock performance trends. Growth records, accurate cage and / or pen counts are also very important. The spreadsheet should include the weekly hatchery results linked with the weekly farm results (weekly). This enables timely intervention in response to any irregularities and generates historical data for more in-depth analysis of production performance. H&N International provides you with good spreadsheets to enter your production data. 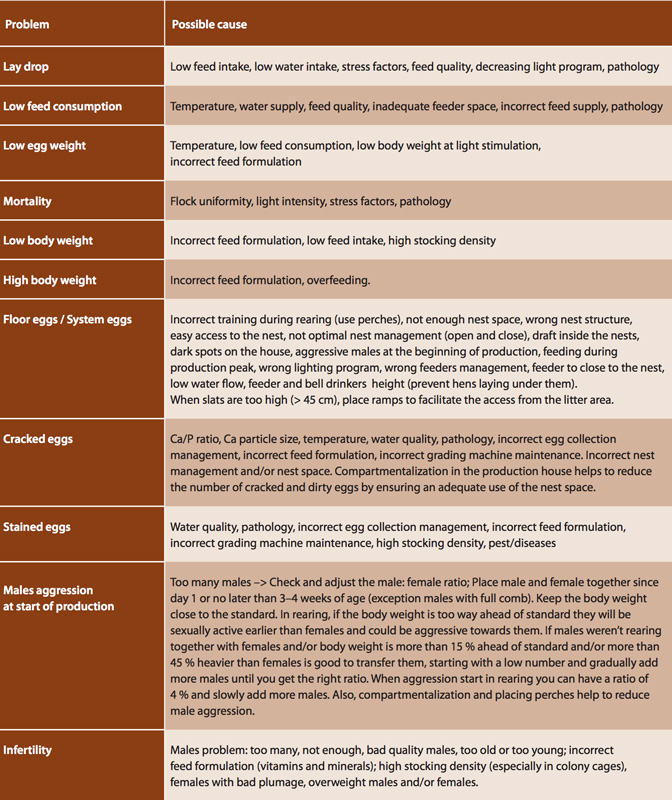 Feather coverage is a key indicator of the hen’s body condition. If hens lose their feathers, a drop-in fertility could happen because females would feel uncomfortable during mating. Also, their thermal insulation capacity will remain seriously impaired impacting directly on feed intake and maintenance energy needs. It therefore means an increase in the production feed costs.

Poor feathering can also be caused by stress or pecking. Excessive feather loss can be due to various factors including: 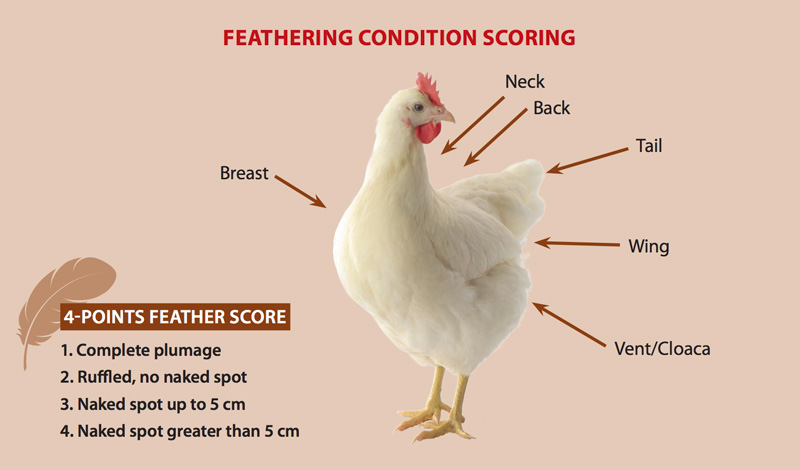 Layers do not consume equal amounts of feed during the whole of the day. 70 % of feed consumption occurs in the early hours of the morning and the last four hours in the afternoon. They also have a predilection for calcium during the last hours of light. To mirror this behavior better, feed times should be adapted with the aim to leave feeders with a very low feed level around eight hours after switching on the lights.

On the other hand, six hours before switching the lights off it can be interesting to concentrate 50 to 60 % of the amount of feed given on that day. Ensure this afternoon feed is effectively distributed to the
hens and throughout all the feeder lines. Important that the birds go to sleep and wake up with a good level of feed. 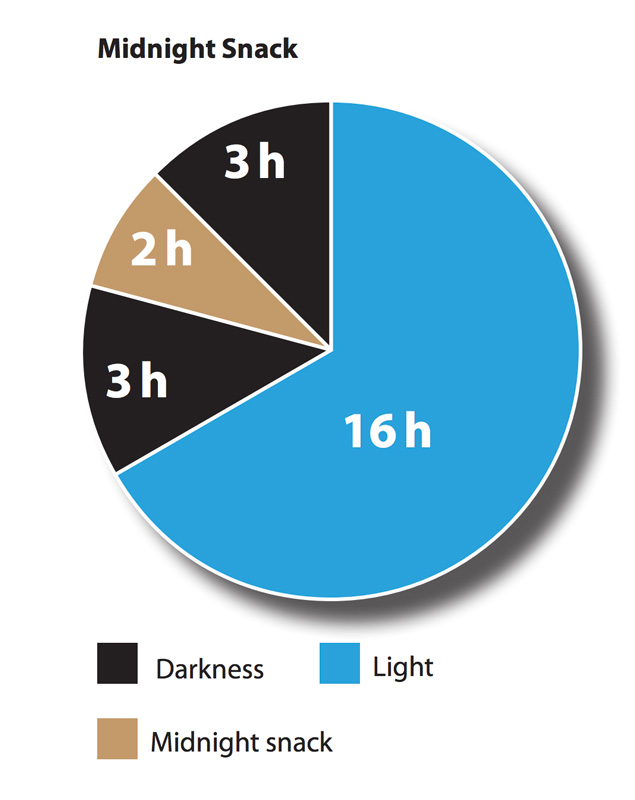 This management technique is used to increase feed intake and allow calcium availability in the hours when the eggshell is formed, and its absorption is increased. It consists of lighting in the dark period to allow hens to feed and refill the crop. The following guidelines should be followed for correct application:

Midnight lighting can be used with different objectives:

Egg process
Egg formation is a complex process that occurs in the oviduct of the hen. The whole process takes around 24 hours, but forming the eggshell takes most of the time (18–21 hours). Lay is a critical moment for hens. If possible, they prefer a protected and dark area. The cloaca could be reversed during the lay process which can encourage cannibalism. If hens retain eggs due to stress, shell defects may occur.

Laying window
The laying window is defined as the time in hours since the lay of the first egg to the last one. Its range varies between breeds of hens. 50 % of the lay takes place around 14 hours after switching off lighting or after the sunset. It is useful to know when most of the eggs have been laid.

This information can also be used to advance or delay the time of sunset, although periods of 16 hours of light are used routinely.
There are differences between the laying window of Brown and white breeders. Brown Nick starts laying earlier than whites while SN/NC concentrate the production in a narrower window. Consider this when planning the hatching egg gathering and nest space. 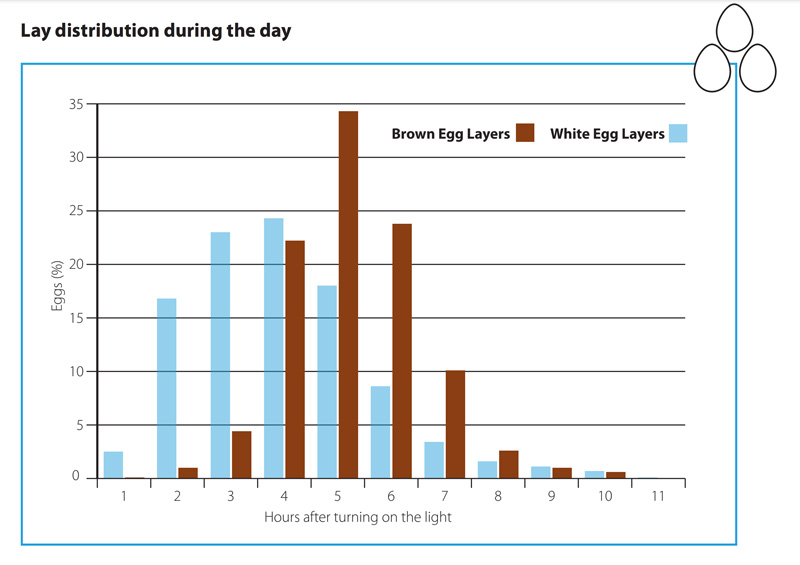 The completed mating in chickens is the culmination of a sequence of behaviors which is completed when the cloacae of male and female come into contact and the rooster’s ejaculate is released directly into the hen’s vagina via her cloaca. In the typical breeder house with large population of birds the entire sequence of behavior does not always occur and most of the time we can only see the last part when the end of the mating behavior.

The frequency of mating follows a diurnal pattern with mating frequency reaching peaks early and mostly late in the day when more than 50 % takes place within 4 hours before lights going out at the breeder house. The first 3 to 4 weeks after transfer/light stimulation must visit the farm 3 to 4 hours before bedtime and see where are males and females? How are they (grouped, mixed) and sit down for 15 minutes to evaluate how is the mating behavior, do you see lots of mating or are the hens hiding? As the male ages the frequency of mating decline, impacting on the flock fertility 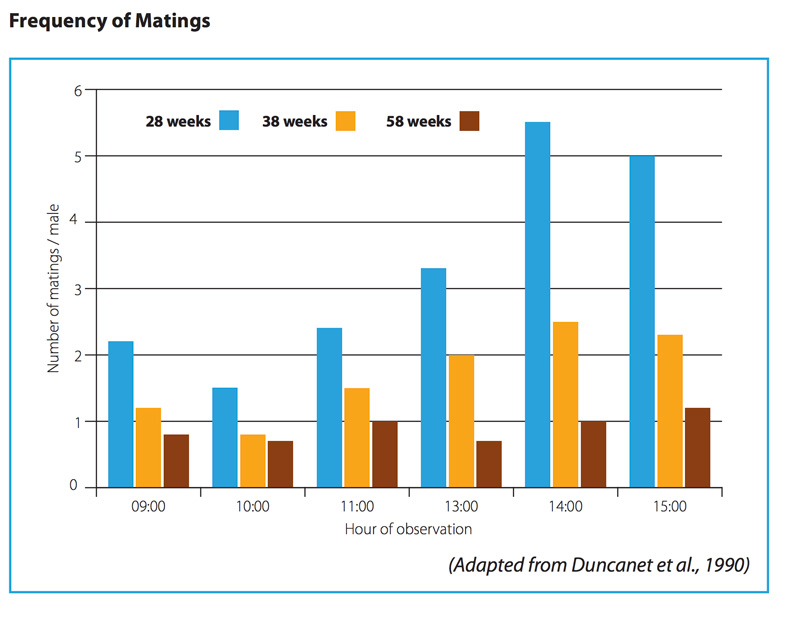